On “Proving It” (or Being A Survivor in the Skeptical Movement)

(Trigger Warning for discussion of rape [not explicit].)

I was a skeptic long before I was a victim of rape.

Well, I guess to say “long before” is a tad disingenuous of me. I became a skeptic just about a year before. But it was definitely one of my defining attributes at the time.

Just before venturing off to college, I found myself immersed in the online atheist/skeptic community, and the solace that I found there was the biggest driving force behind my decision to co-found my university’s Secular Student Alliance a year later.

But something happened in the meantime. And it was … well, I guess I’ve already told you all about that. Needless to say, as soon as I made sense of what had actually happened to me, that replaced everything else as my predominant marker, my new most defining attribute. I was a rape survivor. A feminist. An advocate of sexual assault awareness.

Oh, and I was also a skeptic. An atheist. And I had been for a while.

Something I’ve noticed recently, though, since embracing my newfound identity as a feminist and survivor of sexual assault (and everything unpleasant that comes along with that), is that the skeptical community is largely comprised of straight, white, educated, cisgendered men.

What’s wrong with that, you may ask? Well, nothing inherently. But I’ll tell you what happens.

All five of those prevailing characteristics carry with them what is referred to as privilege. (Eek! It’s a buzzword, I know. Please keep reading anyway, despite your desire to:  (╯°□°）╯︵ ┻━┻. I will be arriving at the point in a mere moment.) When a person has privilege, it means they experience the world unlike others who lack their respective privilege — and in a good way. It’s not their fault that they’re privileged. But it does mean that they have a responsibility to be aware of their privilege and to, in turn, lend more of an ear to the experiences of others who have not been endowed with said privilege, rather than relying on their own perceptions of the world to determine all of their worldly perspectives.

That might sound vague, so allow me to illustrate what I mean.

A person who has never been the victim of sexual violence has privilege over those of us who have.* They don’t have to live with the post-traumatic effects of sexual violence. They don’t have to have their lives disrupted by triggers or flashbacks or incapacitating fear of repeated abuse. They don’t have to even necessarily think about sexual assault at any point as they go from one day to the next. It’s just not a presence in their lives. It is so far removed from them, that when they hear about it, they have no bearing on it as a concrete event, only as a concept.

Oftentimes, you’ll hear a skeptic (usually a man, I’ve found) say, in response to the subject of sexual assault and/or harassment, something like, “If we’re an evidence-based community, that should go for all things.” Or perhaps, “Until we have all the facts, we can’t come to any logical conclusion.” Or even, “Anecdotal evidence is not evidence.”

All of which, by the way, are statements that, given any other context, I would wholeheartedly agree with.

Now, you might be thinking, “but cassy! that’s not very skepticism of u!” and you may be right. But I’m not going to throw a bunch of statistics at you right now, because they’re all outdated and probably wrong anyway (I’ve never heard a rape statistic that I didn’t think was guilty of actually understating the problem, given what I know about the experiences of those who have opened up around me), and besides, you’ve heard it all before. (But just in case you haven’t, HERE. Sorry, I couldn’t resist.)

What I am going to say is this: Rape happens so much more frequently than you think. There are — without a doubt — women (and men) in your life who have been sexually assaulted, and more often than not, have left you in the dark about it, because we live in a vicious society where victims are blamed for circumstances out of their control and no one is properly taught about consent or what to expect from a healthy relationship. And no, they cannot provide you with proof. What proof do you think they will have at their disposal? Do you think they thought to take video of it with their iPhones? Do you think the perpetrator will actually come forward and confess upon being asked if the events happened “as alleged”? Do you think there’s some sort of test that can be performed in a lab somewhere that will demonstrate exactly how the Raped party screamed “No!” but the Rapist didn’t listen? What is it that you want? What is it that you think you’ll find if you investigate the claim to its “logical conclusion”?

When it comes to rape, all you have is anecdotal evidence. And you know what else? No matter how much doubt you have about the events described, I guarantee you that the victim of the assault is experiencing those doubts inside his/her head on a level wholly unimaginable to you. And they’re blaming themselves. And they feel certain that no one is going to believe them.

And when they finally do tell someone, maybe that someone does nothing else but simply live up to those expectations, so that their newfound confidante just drives them back into their vacuous pit of doubt and self-loathing — only even farther this time, because the more that those doubts are validated, the more likely the person suffering for them is not going to make it back out of that darkness the next time.

And that’s a fact, by the way, since facts are what you so fervently require.

“What about rape kits?” you might ask. Well, I don’t know if you heard about the rape kit backlog fiasco that’s been going on for decades, but that’s taken a major toll on the system’s credibility, and people are still rallying nationwide to push for the end of the backlog.

Secondly, the rape cases that these kits would predominantly bring to justice are those rapes perpetrated by strangers (due to the fact that in all other cases, the perpetrator is already identifiable), which, if you know the first thing about sexual assault, is among the least common realizations of rape.

And lastly, due to the rape culture in which we live, victims of sexual assault often struggle to come to terms with the fact that they have been, in fact, assaulted — their first instinct is not so much to call the police or a rape crisis hotline, as much as it is to stay paralyzed for weeks, months, or even years, stun-stained with shame and shock and fear — and above all else, doubt. Particularly when it’s an instance of acquaintance rape because — as you might be able to imagine — it’s especially challenging to try to wrap your brain around the fact that someone you know, someone you trust, someone you may even love, has violated you so consummately.

And that’s why our current system of testing, investigating, and prosecuting is so unreliable.

Yes, I understand that false rape allegations are also problematic and destructive. They can ruin lives as well. The number that is often trotted out as the rate of false rape reporting (and this is just out of the rapes that actually get reported, which is the minority of all the rapes that actually occur, so just let that sink in for a bit there) is 8% … But what does “false” mean, in this context?

When you hear people cite a rape allegation as “false,” they are many times unwittingly referring to the cases that are merely “unfounded” — which, if you’re unfamiliar with the lingo, generally means neither proven nor disproven.

That last one is the real stinger for me. By the FBI’s standards, my rape would have been tossed aside as “unfounded” had I reported it. And with our justice system the way it is, can you really blame me for having not?

This is not to say that false reports never occur. Surely, they must. But given how grossly underreported rape is, and how the fear of being disbelieved and/or blamed is one of the key contributors to that problem, and how damaging those attitudes can be to a survivor’s mental health … I’d say that the most logical thing to do in this scenario would be to suspend your skepticism. Just for long enough to believe for one minute that there might actually be something real that’s beyond your understanding.

It happened to me.

And it shouldn’t have to be my burden to “prove it.” 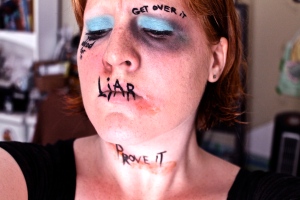 *Re: privilege — someone noted on Reddit in response to this post that “Not being raped isn’t a privilege, it’s a right.” AGREED!